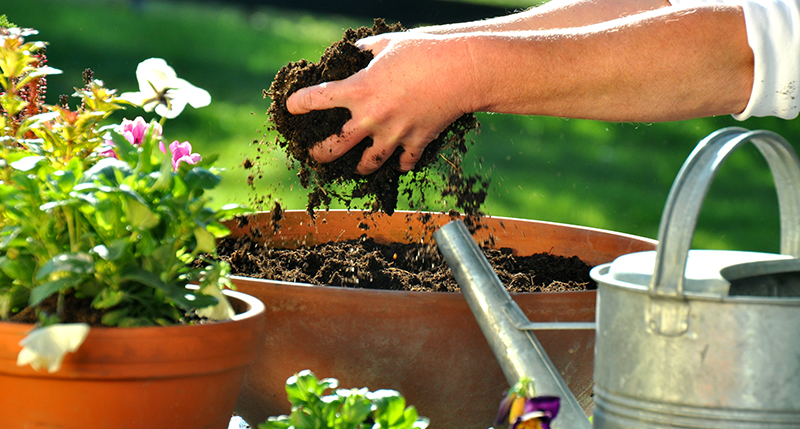 Premium potting soils – a science of its own

Premium potting soils – a science of its own

Potting soil is one of the most popular gardening accessories. But what exactly makes a good substrate for planting? And must good quality inevitably be more expensive?

It provides plants with reliable support without slumping or compacting – and it does so for at least several months, even though the substrates differ clearly depending on their compositions. For example, peat and coco coir have an extremely stable structure, which is why indoor potting soils with a high percentage of peat or coconut fibre hardly lose any of their volume even after many years of staying in the pot. In contrast, raised-bed soil mixes settle noticeably within a single season, because microorganisms decompose the compost and bark humus that make up a large part of the soil mix. Nutrients and heat are released in the process, which is actually one of the big advantages of raised-bed gardening; so to speak, a welcome “flaw”.

But it doesn’t store too much water either, because waterlogging would cause the tender plant roots to rot. To ensure supply of both air and water to the plant roots, the substrate for planting must have the right ratios of the various constituents: fine to coarse and water-retaining to substrate-aerating. And what’s also important is that if the soil ever dries completely, it should be easy to soak.

In other words, it must store sufficient nutrients to ensure that the nutrients are not leached out next time the plants are watered, and it must release the nutrients to the plants as needed. The latter isn’t as simple as it sounds, because which nutrients can easily be made available to the plants depends on the pH value of the substrate. Good to know: most potting soils already contain defined amounts of fertiliser. For example, they may contain small pellets of controlled-release fertilizer that release nutrients depending on temperature and soil moisture. So there is no need to feed the plants for the first few weeks after potting. Also, substrates based on compost and/or bark humus release nutrients over a prolonged period of time. The information provided on the potting soil packaging tells you when and how you should start feeding after potting.

What soil for what purpose?

It needs genuine expertise to meet all plant requirements as best as possible and, at the same time, pay attention to additional aspects, such as peat-free products or a low shipping weight. Along with constituents such as peat, compost, wood fibre, coconut coir and bark humus, smaller quantities of additives are also used in substrates. These include, for example, clay to improve the nutrient and water holding capacity, and perlite (a volcanic rock expanded by heat) to improve aeration. Of course, a certain amount of mineral or organic fertilizers is also a must – for example horn shavings, horn meal, sheep’s wool, guano or grain meal, a by-product of maize processing.

Substrate producers use these constituents and additives to create many different kinds of “recipes” for substrate mixes – always with a view to the requirements of the plant species in question (e.g. “tomato potting soil”, “rhododendron potting soil”) or a group of plants with similar needs (“potting soil for B&B plants”, “potting soil for foliage plants”.

The fact that special-purpose substrates are more expensive than general-purpose substrates might make sense. However, why are there such enormous differences in prices between substrates with the same purpose? The reason can be the feedstock origin. For example, despite the shorter distances, locally sourced bark humus can be more expensive than bark humus originating abroad. But above all, differences in prices are based on higher constituent quality and the cost of quality control.

Good potting soils should not contain any germinative weeds, if possible. However, to ensure this is the case, the temperatures during the composting process to make compost must be high enough and peat must be steamed, if necessary. Other unwanted elements in substrates include pathogens, heavy metals, insecticides or plant-damaging substances such as phenols, which are released by insufficiently seasoned bark products.

The Gütegemeinschaft Substrate für Pflanzen e.V. (GGS) recommends amateur gardeners to use potting soils labelled with the RAL quality mark to avoid annoying surprises. The properties of quality-certified substrates are monitored by approved independent labs. The substrates are only permitted minimal deviations in pH value and nutrient contents, must have a stable structure and be proven to be free from weed seeds and plant-damaging substances. Consequently, the slightly higher cost of RAL-certified potting soils is an investment in plant enjoyment without limits. An investment that is well worth the effort.