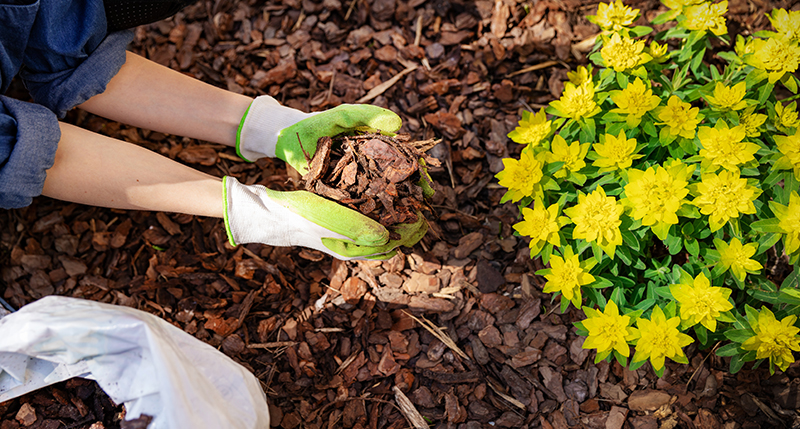 Great for the climate

Which material is used for what purpose?

A trend that almost turned into a curse. Over recent years, front gardens all over the country were topped with thick layers of gravel or pebbles, creating monotonous plant graves with just an occasional ornamental grass showing itself. No trace of life anywhere.

Gravel and pebbles – for poor soils only
“Easy-care” was the magic word that caught the imagination of many a garden owner. Turned out though that there was a bit of a misunderstanding involved. Many people got the idea from public green spaces. There, gavel and pebbles have come to be used very successfully as mineral mulches. However, they are applied in a much more differentiated manner, in other words, mainly for mixed plantings with perennials that prefer a soil on the dry side and with low nutrient levels. Besides, and this is the key factor, they are always used in combination with low-nutrient special-purpose substrates.

Plantings like this that are inspired by nature are indeed very easy to maintain, but they require considerable effort when being set up. The expenditure pays off for county councils, especially because it is primarily incurred in the context of new developments and saves maintenance expenses in the long term. In contrast, in the case of private gardens, most people probably aren’t willing to bear the cost of soil replacement.

Doesn’t work – mineral mulch on garden soils
The problem is that simply dumping gravel or pebbles onto the existing soil doesn’t work. The reason is that garden soils are usually quite rich in nutrients – which of course suits common weeds very well. Sooner or later the latter will find their way through the mineral mulch cover or take root in the thin layer of dust and soil that is inevitably deposited on and between the stones over time. This is when the nuisance really starts, because there is no way you can weed the ground between the stones efficiently. Also, more and more municipalities are restricting the sealing of front gardens with pebbles, gravel or grit, because these sealed areas have a negative impact on urban climate.

Works perfectly – bark mulch on garden soils
Bark mulch is a proven alternative for garden soils with a reasonably good level of nutrients. You want to prepare the ground carefully by removing all weeds with creeping underground stems such as ground elder or common couch. As a next step, it is recommended providing a layer of medium (10-40 mm) bark mulch five to seven centimetres thick to suppress weeds. Smaller perennials only require fine bark (0-20 mm) in a layer of three to five centimetres. The recommendation for roses and other ornamental trees and shrubs is a mulch layer of around seven centimetres with medium to coarse bark mulch (10- 40 mm or 10-80 mm). As a rule, keep an area with a radius of five centimetres around the foot of the plant uncovered. Because bark mulch decomposes over time and binds nitrogen from the ground in the process, you are advised to provide a compensating fertiliser application to perennials and shallow-rooted woody plants – for example using 40 to 80 g of horn shavings per square metre. No compensating fertiliser is required for deep rooters like roses. An advantage is also that the slow decomposition releases other important nutrients, which are important for plant growth!

Play it safe with the RAL quality mark
Excessively fresh bark mulch can release phenols and other plant-damaging substances. In contrast, high-quality bark mulch is stored for some time before it is sold to allow these substances to degrade. Gütegemeinschaft Substrate für Pflanzen e.V. (GGS) recommends that consumers only use products that carry the RAL quality mark. Quality-certified bark mulch is subject to constant laboratory testing by approved independent labs testing the mulch for criteria such as particle size, plant tolerance and potential contamination with pollutants and hence guaranteeing a consistent high level of quality.

This is what bark mulch can do for you
• It makes the garden bed look even and neat.
• It suppresses weeds, especially seed weeds.
• It reduces evaporation and therefore irrigation requirements.
• It decomposes with time, adds organic matter to the ground and stimulates soil life.
• It prevents the soil from silting or being washed away (especially from slopes) in heavy rain.